Skip to content
Before discussing on deadlocks, lets see type of locks and their acquiring methodolgy in PostgreSQL.
Types of Locks: 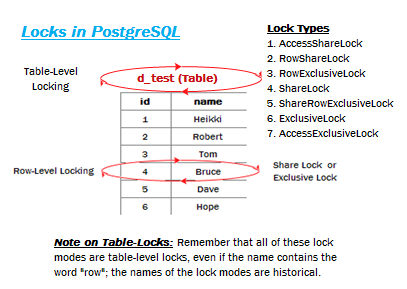 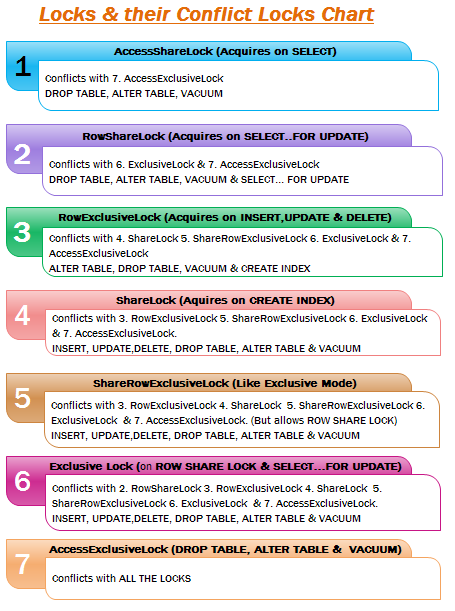 DeadLocks:
Now Deadlocks, you have seen the lock modes and their lock aquiring methodology, there are situations some of the transactions fall under deadlock. I believe application designing is the culprit forcing transactions to deadlocks. Deadlock mostly caused by ExclusiveLock’s  i.e., UPDATE or DELETE.

What is deadlock ?
Process A holding lock on object X and waiting for lock on Object Y. Process B holding lock on Object Y and waiting for lock on Object X. At this point the two processes are now in what’s called ‘deadlock’ each is trying to obtain a lock on something owned by the other. They both will wait on each other forever if left in this state. One of them has to give up and release the locks they already have. Now, deadlock detector comes into picture and allow one process to success and another to rollback.
To over come deadlock, design application in such a way that any transaction UPDATE or DELETE should succeed with complete ownership on the table.  Lock the table with ‘SHARE UPDATE EXCLUSIVE MODE’  or  ‘SELECT…FOR UPDATE’ or ‘ACCESS EXCLUSIVE MODE’ and complete the transaction. In this model, deadlock detector never throw that it has hit by a EXCLUSIVE LOCK’s.
You can test the scenario given in the pic above with the resolution, you see that deadlock detector never throws error.
Locking Query:
Locking information Links
http://www.postgresql.org/docs/9.0/static/sql-lock.html
http://developer.postgresql.org/pgdocs/postgres/explicit-locking.html
Hope you got some idea on PostgreSQL Locks. See you all soon with another good blog…. 🙂
–Raghav

24 Replies to “Deadlocks in PostgreSQL”